You guys are probably hating my guts for not translating and nek minnit you find me in Japan. I’m totally not here just for the merch /shot NO seriously LOL I’m here on exchange for one semester and yeah I promised my friend I’ll try to keep a blog about my merch hunting and loot experiences here. I probably won’t be doing a blog post for each thing that’s happened rather a collation of everything that’s gone on in the past few days ww (when I remember). Apologies in advance for the crappy quality of the photos! _(:3」∠)_

It’s only been 4 days and I feel like I’ve done so much just trying to settle in but hey, I managed to find time to go shopping haha.

It was raining, pouring, raining cats and dogs and WINDY. I seriously considered not going out at all because of it but then I told myself it’d pretty much the only day in the coming week I’d have and entire day out alone to explore. And by exploring I meant SHIBUYAAAAAAAA. I have plans for Akihabara and Ikebukuro in a few days. (◡‿◡✿)

Started off by going to Mandarake to sell off some manga/doujin/novels/CD for me and a friend. I really didn’t intend on staying for long but I ended up wandering………yeah. Kept telling myself as I looked at the shelves that I didn’t need anything. It was only my 2nd day here so I had plenty of time to come back and buy the stuff. The result of that? Say hello to my loot LOL

Then I ‘popped by’ Animate (Shibuya) that was above in the same building and asjdfaoijsrgoaijf *sobs* It was heaven when I walked in. All the FREE!, KuroBasu, Haikyuu!, KagePro, etc. goods right at the entrance. It took more self control than at Mandarake not to spend everything but yeah, I did end up getting stuff haha It was so hard to stop myself. I need someone to stop me when I get to Ikebukuro ggaaahhhh

Oh yeah, I did get an Animate point card and the JUMP! Fest was still going on so that’s why there’s Shiraishi and Naruto stickers there haha. I finally got my hands on One Week Friends but I forgot to buy volume 5. Not to worry because I went back on 1st April to get it. Should have waited until then to get the series because the campaign just started. QwQ

By the time I finished that quick wander of Animate, it was past lunch time so I went to the PARCO building and got lunch there. I was trying to go to the Little Twin Stars Cafe (Kiki & Lala) but it was packed. The line outside the cafe meant I had to wait at least an hour or more, and that’s me and my underestimating haha. I gave up on that so I literally turned around on my foot and saw the Rejet x Collaboration Kitchen. It wasn’t crowded and it was empty save about 3 other customers. I figured why not since I’m here and apparently it’s usually crowded.

Someone had taken Kou-chan’s table (and it was a 4 seater in the section where I was) so I sat down at Shu’s x3 Just to go with the table I got Shu’s drink (mango w/ cream) The fresh mango was really sweet *Q*. The Bloody Ocean Squid Ink Pasta. GOING SAKAMAKIIII!!!! (Since the omelette is a Mukami dish.) The ‘bloody’ part of it was the tomato sauce for the pasta but it had a bit of spice to it. I actually ate a bit of chili xDD

The food was pretty normal, I really didn’t expect anything spectacular since I knew I was paying for the DIABOLIK LOVERS label more than anything else haha. I did end up getting the dessert set, this time with Reiji’s drink because I wanted something refreshing. It was lemon and soda water w/ QQ jelly at the bottom. It was a nice match with the pancake since anything else would have been too heavy after the lunch haha.

The pancake is Kanato’s teddy pancake. The pancake was nice and moist and not too fluffy to make me bloat ww. There was a scoop of mango icecream underneath the pancake, supported by 2 pieces of pastry. Around it was whipped cream, chocolate source and cranberries. At first I was like “why are there sour cranberries? To balance out the taste?” I think I was thinking too much into it because when I burst the cranberries, the juices flowed out into the cream like blood. owo;; SASUGA VAMPIRE.

I swear I sat at the cafe for 2 hours eating, tweeting, enjoying the endless loop of PVs and the Diabolik Lovers tapestries. I forgot to take a proper picture of the inside but I did remember to take a picture of some tapestries ww. There were other merch like chocolates for sale but I didn’t get any. At the register, I got my 2 random coasters (since I ordered 2 drinks) and got Subaru and Kanato. Not my favourites (Shu & Kou) but I still like them and the colours so *hogs* I’m actually using Subaru as I type this ww

I went downstairs to check out where the Rejet Store would be even though it was under renovation and look at what I saw. The Otomate CharaPop Store. It was mostly the kujibiki and small merch for 4 titles. I don’t know how long I stared at the Norn9 stuff but I managed to pull myself away. Rejet’s store is just opposite it xDD 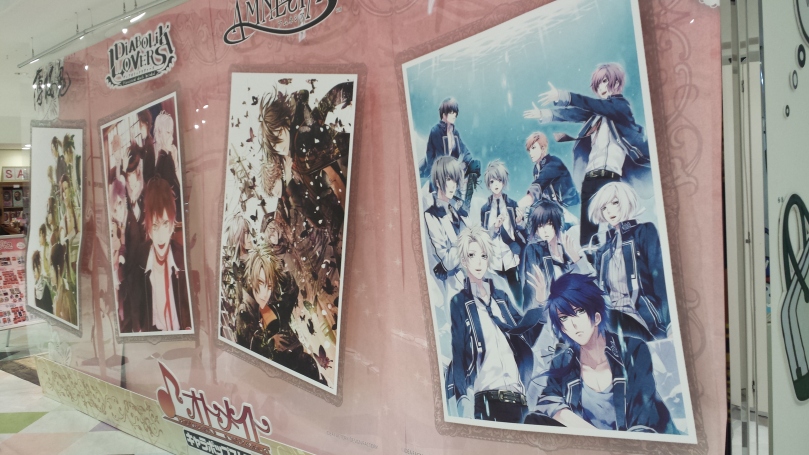 Not much really happened apart from meeting my tutor, the student who I can contact if I have any problems and can help me around. UNIVERSITY ENTRY WITH THE SAKURRAAA!!! This is right outside the library. =33

After the campus tour and language placement test most of us went to Yoyogi Park near Harajuku to enjoy the sakura. They were so much whiter than the ones I saw in Okinawa *A*

2nd day of Orientation and WOAH the amount of first years swarming the university. They were all in suits so I felt kind of out of place along with the other exchange students w I got a stack of documents to fill and what not then 3:30pm everything for that day ended so I decided to go back to the dorm…… after making a SLIGHT detour.

I went to the Rejet Store first and lined up for the kujibiki. I only did it once and got two B prizes and 3 C prizes. I WANTED A FOR THE CUSHION *SOBS* The girl after me got an A prize QwQ I ended up getting everything Ken ga Kimi though haha. I don’t know if I’m lucky or not since I didn’t get the A prize but AT LEAST I DIDN’T GET ANY D PRIZES……… Also bought the Short Story booklet for Wasurenagusa and because I spent over 3000 yen, I got to get a novelty prize (I chose the MARGINAL#4 bag) and they gave me a random postcard.

I also picked up the free booklets xDD 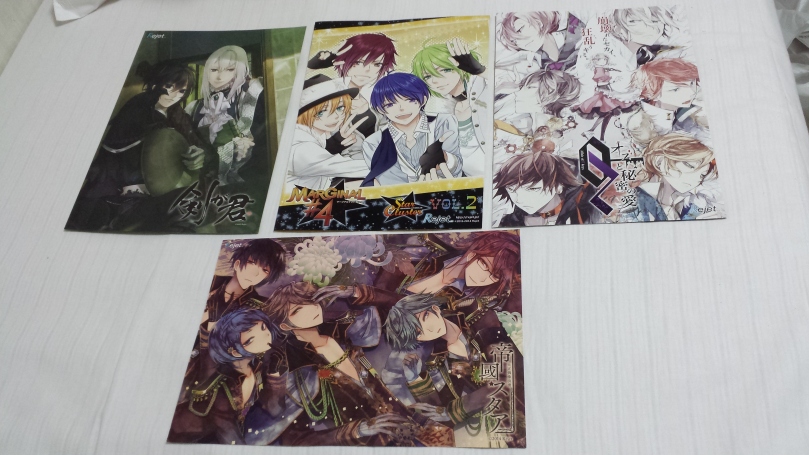 On one side of the Rejet Store, you can see the Ken ga Kimi HUUUUGGGEEE poster-wall. I couldn’t get a whole picture of it but I did get individual shots!! >w<

On the way to the train station, I stopped by Animate again to order KENN’s vocal album and buy the 5th volume of One Week Friends and off I was back to the dorm. I tried my luck at one of the FREE! Gasha’s there and hehehe….. 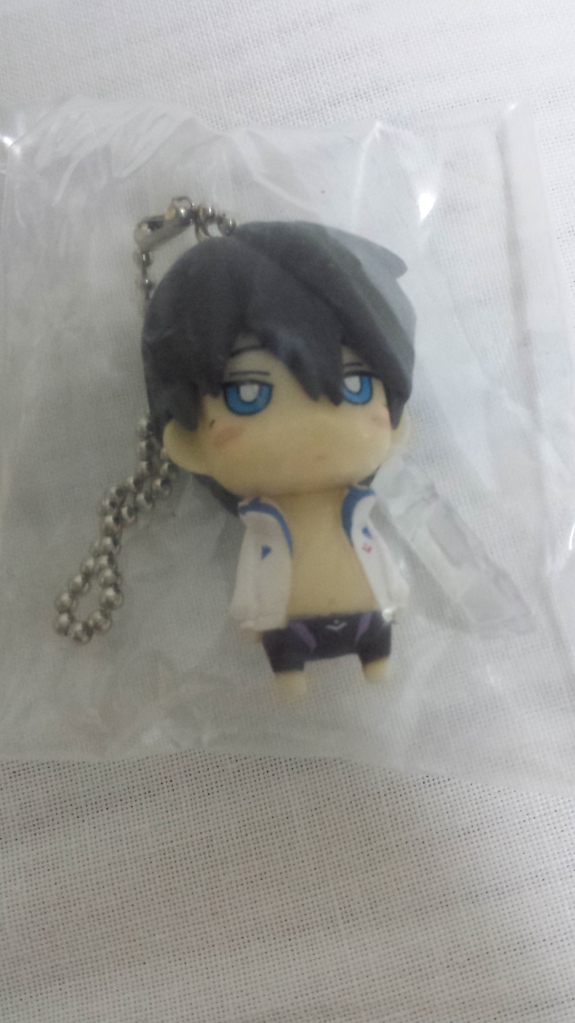 Popped in 200 yen and out came Haruka x33 Everything after that was uneventful since it’s just me eating at the dorm and coming back to the room an typing this up. owob The next few days are probably just more orientation stuff and very little chance of me getting to explore anywhere until Saturday and Sunday before uni starts. (gahh, I’m really nervous about that asledfjaoseijdf)